In a world where competing media codecs run rampant, VLC is a lifesaver. Version 3.2 came out last year, bringing UI improvements, a new TV interface, and support for Chrome OS keyboard shortcuts among other things. Now 3.3 is ready to go, and it completes the UI revamp with a more modern Material look that’s right at home on Android 11.

Praise be, bottom navigation has made it into VLC on Android after months in beta. Sure, we were all sad to see the aptly-named hamburger menu lose prominence, but bottom navigation is a major win for large-screen devices and those of us too lazy to move our thumbs more than an inch or two.

The bottom navigation in VLC 3.3 looks clean as heck.

Dark mode has been tweaked to be all black. While this might be suspect from a usability standpoint (and actually goes against the latest Material Design guidance), it could marginally improve battery life on modern OLED screens.

VLC users spend most of their time playing back videos, so it’s only fitting that the playback UI should see improvements as well. According to developer Nicolas Pomepuy, this area has been given a more modern design due to popular demand. Also, users can now lock screen orientation directly in the controls. 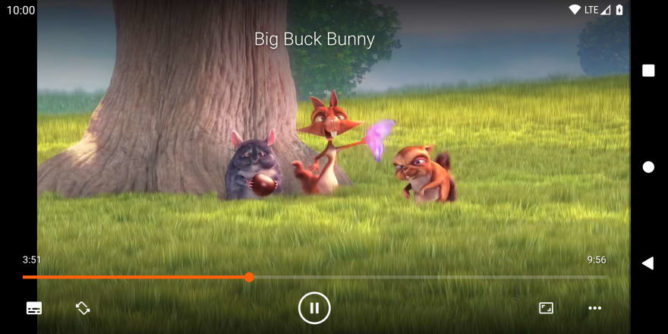 There are many smaller tweaks throughout version 3.3 of the app, including the reworked subtitle downloader, track syncing UI, AB repeat feature, and more. If anyone still watches DVDs and Blu-rays, support for them has been improved, since VLC will now save current progress. There’s also a new feature that allows users to “sponsor” VLC with monthly donations — this is an open-source project that’s freely available for everyone, after all. And there are more changes under the hood, like how the project has been split into gradle modules and many icons are now vectors.

VLC 3.3 is certainly a major milestone for the popular open-source media player. While the new update doesn’t appear to be available quite yet, you can try out an early preview for yourself by downloading the latest 3.3 release candidate from APK Mirror. The official build should be hitting the Play Store soon, too.